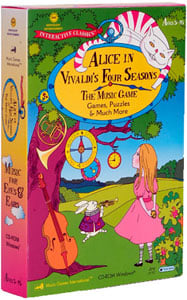 Winner of over 35 media, industry and educational awards, including Teacher's Choice and Teacher Raves Awards, MGI's Interactive Classics Series has been called "a perfect marriage of music and technology." Both Teaching Music and American Music Teacher Magazines recommended the series. The Series, consisting of three interactive musical titles, is filled with a variety of musical games, puzzles, riddles, animated encyclopaedias, listening rooms, trivia and other educational music-related activities. The titles are: Tchaikovsky's Nutcracker, Mozart's Magic Flute and Alice in Vivaldi's Four Seasons music games.
Select a Product
My Library
What is My Library?
Powered by Rating-System.com
Share this title