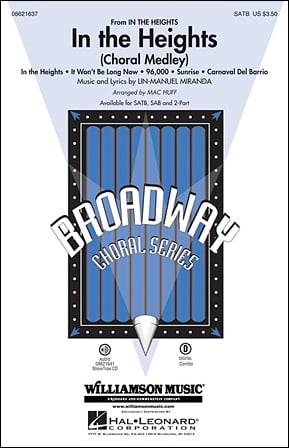 (Choral Medley)
Lin-Manuel Miranda/arr. Mac Huff - Hal Leonard Corporation
This exhilarating show, which celebrates the colorful New York neighborhood of Washington Heights, has been thrilling Broadway audiences since its opening in 2007. With an exuberant score infused with salsa, meringue, hip-hop and pop, it delivers a message of hope and self discovery that rings true with today's audiences. The production won the 2008 Tony Award for best musical. Songs included in this thirteen-minute medley are: In the Heights; It Won't Be Long Now; 96,000; Sunrise and Carnaval Del Barrio.
Select a Product
My Library
What is My Library?
Share this title
MY LIBRARY FOLDERS
NOTES TAGS
∗ item exists in this folder Go to My Library >
Item Successfully Added To My Library