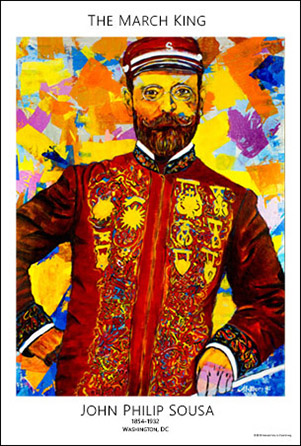 Great American Composer John Philip Sousa (1854-1932) Washington, DC
Sousa, “The March King”, performed over 14,000 concerts, had 3 Hit Broadway Musicals running simultaneously, composed 136 Marches and 17 Light Operas. Sousa served two periods of service in the United States Marine Corps. His father, Joao Antonio de Sousa, signed him up at age 13 as an apprentice musician. Upon his second enlistment Sousa became the youngest Director of the United States Marine Band at 25. Thru his efforts the Marine Band established it's great renown. Sousa is the undisputed champion of the march form and was extremely popular in his lifetime. His influence on band music and the promotion of music after the civil war and into the 20th century are still being felt today. His popularity was so great that almost every town in America boasted it's own community band.  Sousa is the composer of the National March of the United States, “The Stars and Stripes Forever”. Poster made from an original painting by Al Moretti.