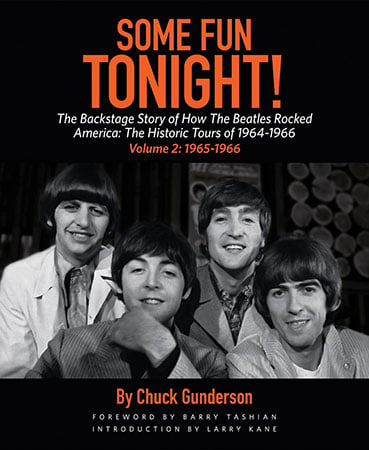 Some Fun Tonight! The Backstage Story of How the Beatles Rocked America: The Historic Tours of 1964-1966 is a comprehensive two-volume set which gives you a city-by-city synopsis of the group's activities as they traveled the United States and Canada for their groundbreaking series of concerts. From San Francisco's Cow Palace show on August 19, 1964, through their last-ever live performances at that city's famed Candlestick Park on August 29, 1966, these books cover the music and the madness that characterized the Beatles' three North American tours. With hundreds of photographs and images of rare memorabilia, it is truly the definitive reference for what is arguably the most important period in the Beatles' long and winding career. You'll read about the behind-the-scenes negotiations, the mayhem at the airports and hotels, and the cheeky quotes delivered at the press conferences. You'll also read about the opening acts, the concerts, and the stories behind the shows through the eyes of the Beatles, their entourage, the promoters, the emcees, and the fans. Never before have the Beatles' North American concerts been covered in such depth.

Copyright: New York, NY: Backbeat Books ©2016
Select a Product
My Library
What is My Library?
Powered by Rating-System.com
Share this title