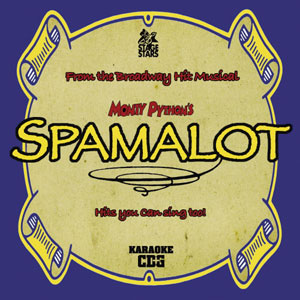 Featuring 13 songs from the Broadway musical Monty Python's Spamalot, this album is a new recording with fully-orchestrated accompaniment tracks. Spamalot, which is based on the film Monty Python and the Holy Grail, won the Tony Award for best new musical in 2005.

There are 26 tracks on this karaoke album: Tracks 1-13 contain the complete recording with background tracks and guide vocals; tracks 14-26 contain the accompaniment tracks alone.  This album is recorded in the original show key and show tempo. When played on a karaoke machine, lyrics will appear on-screen.  In a conventional CD player no graphics will appear onscreen, however, a lyric booklet is provided.