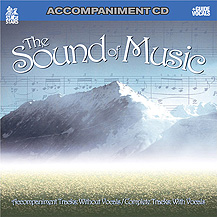 There are 32 tracks on this album: Tracks 1-16 contain the background tracks and guide vocals; tracks 17-32 contain the accompaniment tracks alone.  This album is a re-recording in the original show key and show tempo.