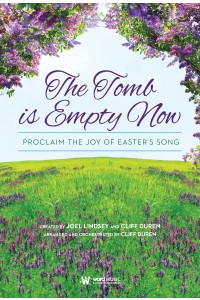 The love Jesus displayed on the cross and the death He died there isn't the end of the story. Somewhere in the night the Lamb of the cross became the Lord of an empty tomb. Now, centuries later, we live because He Lives. Because Jesus died and was laid in a tomb, that tomb is empty now. Included are familiar hymns and modern worship favorites blended together with a powerful and enduring message, the message of Christ's love and resurrection. Complete with a dramatic narration and stunning choral writing, your choir and congregation will be blessed this season with the renewed realization that the tomb truly is empty now. 39 minutes.