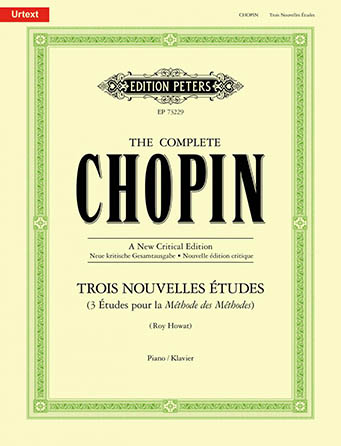 Originally published in 1840 in the multi-composer Methode des Methodes, the Trois Nouvelles etudes are Chopin's least overtly virtuoso studies, but arguably they are the most quietly sophisticated of all in terms of how they train the pianist's sensitivity to sound, rhythm and texture. Debussy once said he had 'worn his fingers down' playing the second of them. After 180 years it seems extraordinary that new details can still be found in the pieces, but Howat's edition prints some for the first time, notably a number of melodic variants in the first Etude, plus notes in the second Etude that all previous editions 'bowdlerized'. Acting literally as a pivot in the second Etude's structure, these authentic notes – sensitively restored here – alter our perception of the music's texture and voicing just as the piece takes wing on one of Chopin's most breathtaking strings of modulation. The edition also confirms some authentic fingering still unfamiliar to most pianists, including whimsical thumb 'hops' down the black keys at the end of the third Etude. In keeping with the editorial procedure of this series, the edition is based on a principal source, the manuscript Chopin carefully prepared for his friend Ignaz Moscheles; in addition, some changes that Chopin introduced after publication feature here as variants, allowing pianists to choose options in performance in full awareness of where they come from.