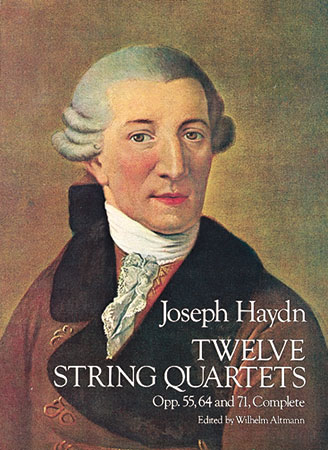 "It was from Haydn that I first learned the true way to compose quartets." — Mozart.

Musicians, music students, and music publishers have a difficult time keeping up with Haydn, whose ceaseless production of original, first-rate work was legendary. He essayed most of the recognized genres, conferring upon several a legacy of expanded possibilities and clearly defined, characteristic form. Among these may be mentioned the symphony, the sonata, and perhaps most notably, the quartet.

In a period of 50 years, Haydn (1732–1809) composed over 80 string quartets. Scholars are still debating questions of attribution and even completeness (unknown works by Haydn still turn up), and music lovers have had to make do with scattered, out-of-date, out-of- print editions of a few of the more familiar quartets.

Otto Jahn wrote: "It is not often that a composer hits so exactly upon the form suited to his compositions; the quartet was Haydn's natural mode of expressing his feelings." Haydn's affinity to the quartet began with his earliest works, when he perhaps more than anyone established the four-movement structure of chamber music. In common with truly great and complete artists, who surpass early innovation to achieve their greatest work at the end, Haydn's later quartets are his best.
This volume contains the full scores of:

Large readable noteheads, ample margins for fingerings, etc., opaque paper, and permanent binding make this a fundamental addition to music libraries and musicians' repertories: a book for all who pay tribute to Haydn and who agree with Grove's Dictionary: "The quartet he … brought to perfection."