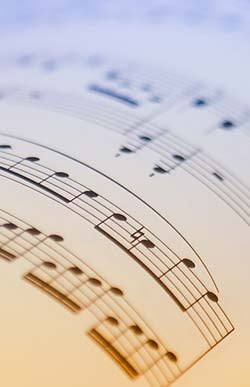 Una Noche en Varadero is a Salsa-inspired piece for Wind Ensemble incorporating elements of Latin music such as the 3-2 and 2-3 clave, bass drum tumbao, piano montunos, jazz harmonies, and stylistic scoops and falls. The piece also has a percussion feature using Latin percussion such as the guiro, timbales, and congas.
Salsa music initially started to rise in New York City during the 1960’s as many Cubans and Puerto Ricans (think West Side Story) who moved there began to fuse musical styles like the Cuban son montuno, cha cha, and mambo with elements of jazz as well as rock, R&B, and funk. Salsa actually means "sauce" in Spanish and normally refers to the spiciness of Latin and Caribbean cuisine, but in the context of the musical style, it carries a slightly different interpretation of frenzied, "hot," or wild. Una Noche en Varadero begins somewhat "tamely" during the introduction until bar 31 when the conductor yells out, "Uno! Dos! Tres! Cuatro!" starting a faster tempo that gradually speeds up throughout the piece until the wild finale with the whole ensemble falling off their last pitch.

Select a Product
My Library
What is My Library?
Order Extra Parts
Share this title
MY LIBRARY FOLDERS
NOTES TAGS
∗ item exists in this folder Go to My Library >
Item Successfully Added To My Library