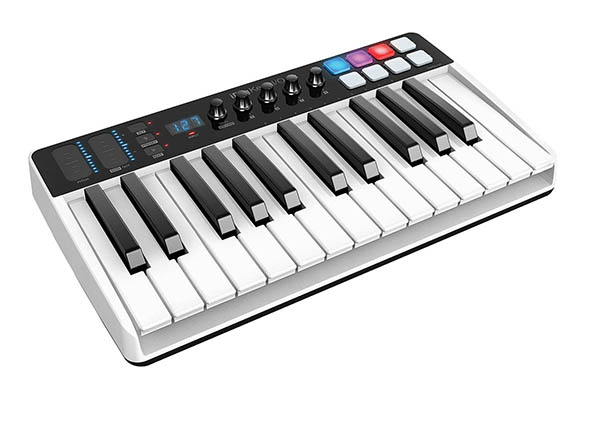 The iRig Keys I/O series evolves as the only controller available that integrates 25 or 49 full sized keys together with a fully-fledged professional audio interface featuring 24-bit audio up to 96kHz sampling rate, balanced stereo and headphone outputs, plus a combo input jack for line, instrument or mic input – with Phantom power. Together with an audio interface, iRig Keys I/O also packs all the controls you would expect from a premium controller including velocity sensitive multi-colored pads and programmable touch-sensitive sliders, buttons and knobs for unique expressiveness and fast workflow.

It is Apple MFi certified and comes with a Lightning cable. Plus, bundled inside is over $550 (25 Keys) and $750 (49 Keys) worth of IK full software and apps that includes SampleTank 3, Miroslav Philharmonik 2 CE, Syntronik, and T-RackS Deluxe mix and mastering suite. All this provides an unmatched selection of everything that is needed to make complete, finished productions.

Select a Product
My Library
What is My Library?
This item appears on the following festival lists:
Share this title
MY LIBRARY FOLDERS
NOTES TAGS
∗ item exists in this folder Go to My Library >
Item Successfully Added To My Library